Teachers union leaders on Monday balked at what Minneapolis Public Schools called its last and best offer for support staff, releasing their own series of videos and documents to explain some of their latest proposals to end the strike.

Monday marked the beginning of the third school week of the strike, which has kept 28,700 students out of classes since March 8.

The union continues to hold out for a $35,000 starting wage for its education support professionals (ESPs) — a priority it has maintained since the start of negotiations.

“We were ready to settle our contracts,” Laden said.

In a recorded video released Sunday, School Board Chairwoman Kim Ellison shared details of the district’s ESP page proposal, which she said would bring 85% of the support staff wages to $23 an hour. The lowest paid ESPs would get $18 an hour, up from $15.45 in the current contract.

“We believe this contract both meets what they’ve asked for and demonstrates a measure of the respect they deserve,” Ellison said in the video.

The offer also includes one-time bonuses for the next two years and $3.5 million to provide more paid hours to support staff, the district said.

If accepted, the proposal would require $10 million in reductions for the next school year, the district said.

In addition to the $35,000 starting wage, the union’s proposal includes automatic step increases and a $5,000 lump sum payment in both years of the contract. It would also provide more hours to ESPs, who are hourly workers.

The Minneapolis Federation of Teachers also released a video update on its latest proposals for the teacher contract, which is separate from the support staff agreement.

Still, union leaders said the two chapters remain united in the effort to settle the contracts.

“We got in it together; we are going to leave together,” said Daniel Perez, a social worker at Green Central Elementary School and a member of the union’s negotiations team.

Greta Callahan, president of the union’s teacher chapter, said the union is in “settlement mode” and has come down significantly from its initial teacher wage proposals.

According to the union’s update, its latest proposal would provide teachers a 5% wage increase in the first year of the contract and a 4% increase the second year. Teachers would also receive a $2,000 bonus in both of those years.

The district’s proposal offers teachers with one to six years of experience wage increases of 5 to 12.5% in the first year, with the larger amounts going to those with less experience. All other teachers would get a 2% boost. In the second year, the district said it is offering a 2% boost for all teachers. All teachers would also receive a $2,000 bonus in the contract’s first year.

“What they have sent over is not making the movement our members need to end this strike,” the union wrote in its Monday update.

“The district has an opportunity to make good on the public statements it makes,” Laden said.

Fri Mar 25 , 2022
A career publishing at the University of California at Los Angeles drew harsh criticism from academics around the weekend for inquiring candidates to work on a “without wage basis.” Nevertheless the putting up has given that been taken down, speculation has persisted about no matter whether its existence was the […] 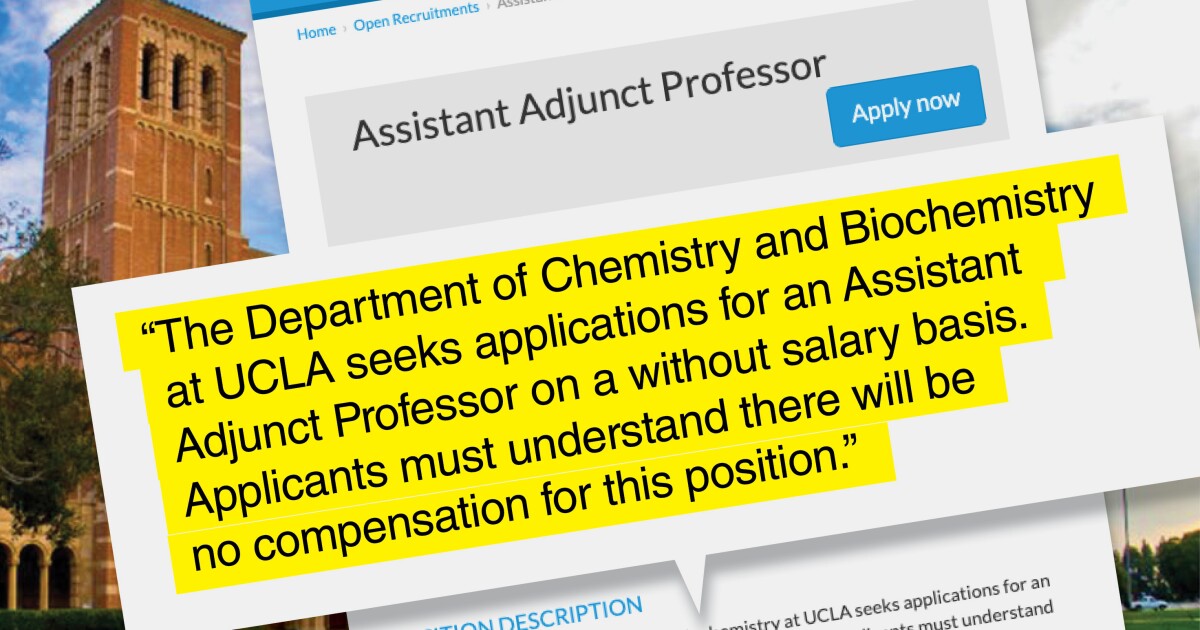