This article was amended on December 23, 2021, to reintroduce historical and contemporary context that had been included in an earlier version of the article. Please scroll to the end of this text to read them.

It’s hard to look away when you see headlines like “NASA refuses to rename giant homophobic telescope.”

Or tweets that read: “So we’ll have a homophobic Nazi-loving space telescope. Is it any wonder why we’re such a screwed up country?”

Or “bringing up someone’s progressive stance on race issues to downplay their participation in homophobia is anti-Black. It uses hetcis  Black people as a shield and it erases queer Black people.”

You don’t need a telescope to see there’s a heated debate in American astrophysics. It’s a debate about discrimination, specifically homophobia; the historical figures we choose to honor by name and with monuments; responsibility; and what classifies as the truth.

That’s where we’re at in December 2021, as United States space agency NASA is readying itself to launch its largest space telescope since Hubble.

All this division and debate threatens to discourage young scientists from entering the field, not to mention possibly detracting from the exciting scientific data set to benefit humanity.

About a space telescope

The telescope in question is the James Webb Space Telescope (JWST).

Scientists started work on the telescope even before its predecessor, Hubble,  launched in 1990. But NASA says the JWST won’t succeed or replace Hubble, it will add to Hubble’s range. Unlike Hubble, it will detect light in the infrared range. That should let astronomers see through clouds of dust and gas in space and create clearer images of how the very first stars and galaxies formed, more than 13.5 billion years ago.

The telescope has been a very long time coming. It’s also one of the most expensive missions in the history of space research, costing the US roughly $10 billion (€8.9 billion) from conception through to the end of its initial five-year operation.

It’s a big moment in space — and thus understandable that some refer to the telescope as a “monument” to international space discovery.

James Webb was NASA’s second-ever administrator — that is, its head or director, serving from 1961 to 1968. Before that, he had been an undersecretary at the US State Department.

In 2002, then-NASA Administrator Sean O’Keefe decided to rename the telescope from the “Next Generation Space Telescope” in honor of Webb.

Webb “played a key role in retaining an active science program at NASA in the agency’s early years,” wrote a spokesperson in an email to DW.

That was the Cold War era, a time of social upheaval in the US. It was also the age of America’s moon missions, but just short of Apollo 11, the first one to touch down.

Getting the US, or any country, to the moon was no mean feat. It was an intensely political era, and with the world still emerging from World War II, the huge sums of money it cost to do that were tricky to round up.

Webb had both served the politics of the day and managed to keep science at the center of it all. Thus, the idea to honor him by lending his name to the new space telescope. 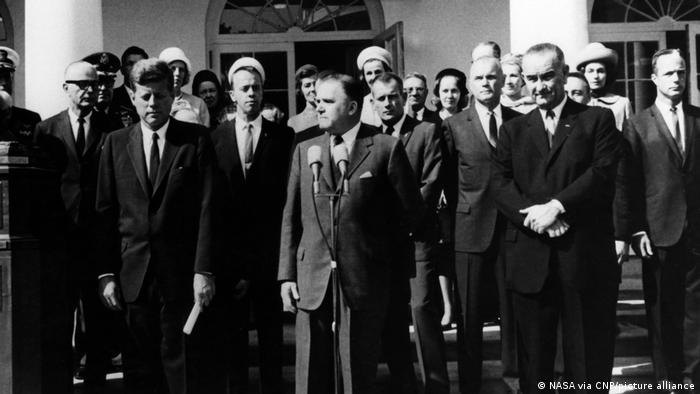 James Webb (center, at microphone) was something of a pivotal figure in the US during the Cold War era

But was anything specifically wrong with the original name? NASA wouldn’t say.

“Changing mission names — for example, changing the Solar Probe Plus to Parker Solar Probe in 2017 — is not uncommon,” is all NASA’s Alise Fisher wrote in reply.

About historical homophobia (and more)

But the name James Webb has divided astrophysicists in America.

Some say Webb was homophobic, even possibly involved in efforts at the State Department and then NASA to sideline, fire and even “persecute” gay people. So by giving the telescope Webb’s name, the question is whether NASA could be celebrating a legacy of discrimination and sending a negative signal to the next generation of astrophysicists.

“Science is not removed from the questions that the rest of society grapples with — we have bias, racism, sexism, homophobia,” said Lucianne Walkowicz, an astronomer at the Adler Planetarium in Chicago and co-author of a petition to get the JWST renamedand a blog post called “The Straights Are Here to Save US“.

Walkowicz says the scientific community “continues to be unwelcoming to people who are LGBTQ or from marginalized identities, people of color, gender nonconforming or disabled. There are many ways in which science broadly and astrophysics more specifically is not welcoming to a lot of people.”

So, while the JWST is an example of a high-profile mission — a celebration of human engineering — it is also “related to a broader grappling in the United States, which has come to a fever pitch with debates over monuments,” says Walkowicz, along with whom those monuments honor.

NASA says it has investigated the allegations against Webb, found no evidence to support them, and rejects the demands to remove his name from the mission.

Hakeem Oluseyi, author of A Quantum Life and president-elect of the National Society of Black Physicists, explored the accusations at length in his blog post “Was NASA’s Historic Leader James Webb a Bigot?”

Oluseyi has come to the conclusion that Webb was unfairly accused, and that many accusers ignore information about how Webb promoted racial integration and equal opportunity at NASA.

“If it had been true that James Webb had been guilty of what these people claimed he was — and it’s not true — then, yes, it would be relevant,” said Oluseyi.

Walkowicz and their colleagues fail to provide context of the time and Webb’s position in it, Oluseyi argued — for example, that Webb wasn’t even at the top of the State Department. In his blog post, Oluseyi also wondered “if Webb was just a ‘good soldier’ who when ordered to persecute gays […] did so, and when ordered to integrate NASA facilities in the South he did that, too.”

He found more evidence, he says, to put distance between Webb and the discrimination against gay people — which Oluseyi admits did place — along with other Cold War “security threats.”

“If you served in a leadership position in a federal government during a time when there was a federal policy that was anti- any group, you are disqualified,” he said.

As with people in the LGBTQ community, Oluseyi says he knows what discrimination looks and feels like — the psychological “radar,” that heightened sensitivity you develop over the years.

Walkowicz says that if you can take the credit for other people’s good work as a director, then they can take the blame for their negative acts as well.

“There is a cartoonish understanding of what discrimination looks like,” said Walkowicz. “Do they want a picture of James Webb being mean to a gay person?”

“What would be counted as evidence, if not a NASA employee being interrogated and subsequently fired because of their sexual orientation? Does James Webb have to be in a room to be responsible?” 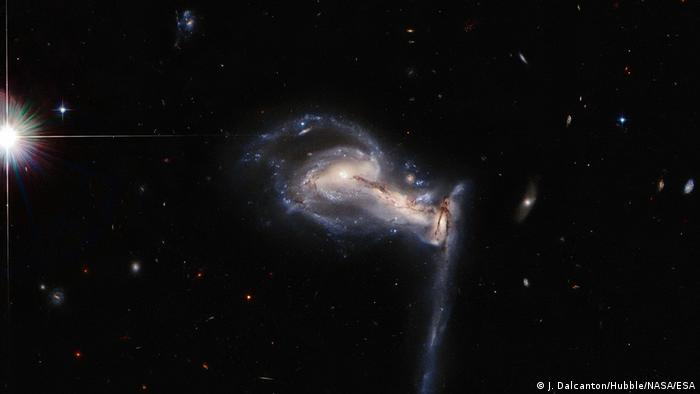 This debate has gotten very messy. From the outside, it feels as if former colleagues Oluseyi and Walkowicz are in a drunken pub brawl, with emotions running high. That’s not to say the debate is wrong, but only that the manner in which it is being conducted could be a little more sober. But who is this writer to say?

“We were cool for a long time,” Oluseyi said. Walkowicz wouldn’t respond when asked about previous work with Oluseyi.

Impact on the next generation

The nature of this debate is potentially damaging to the futures of junior astronomers.

Walkowicz says “discrimination against queer people in astronomy is a persistent problem, effects the lives and outcomes of people in the field today, including junior astronomers.”

But what should young scientists of any background make of tweets that slam a Black American scientist for questioning the facts by telling them to keep their “hetcis reading goggles“?

A debate done like this may detract from the data that scientists say the JWST will deliver for the good of everyone.

Oluseyi also appeared tired when speaking to DW. He said he has faced public attacks against his name and reputation.

And it begs the question: Is that how young scientists should view astrophysics today?

“Just like with all politics, the loud extremists are the ones who get the attention,” said Oluseyi. “And these particular loud people are well connected and very smart,” he added.

Readers will, we hope, appreciate that we can’t include every detail here. We simply couldn’t do all sides justice in this one article. But if you’re interested in more background, please check out some of these references:

We have also written previously about gender and racial discrimination and integration in US space science in the 1960s and the years of the Civil Rights Movement.

*We specifically refrained from adding links to the references above in an attempt to avoid a perception that those links would lead to definitive sources.